Tirpur located on the banks of Noyyal River is a small city in Tamil Nadu. The city is a major hub for textile and knit wear industry. The region like rest of the south India was ruled by Cholas and Pandyas. Carvings and temples from their time period is still seen in the city. Though some of the temples lack maintenance, the architecture of these historic temples is worth paying a visit.


Location of the Sukreeswarar temple 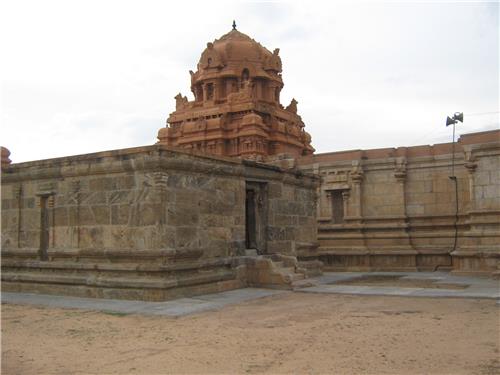 One of the ancient temples on the outskirts on Tirpur city which is less known to the tourists is the Sukreeswarar Temple. It is surprising to know that even the people of Tirpur are not aware of this ancient temple. This temple is from 10th century and is located at Sarcar Periyapalayam (S. Periyapalayam). It lies on the Tirupur-Erode Uthukuli road highway, around 8 km from Tirpur. Lord Shiva (Sugreeswarar) is the main deity of the temple. In kongu region, this temple is considered as one of the four Sirpa Sthalanga. Since this temple is not famous, very few people visit this temple. Most of the days the temple premises remains deserted without devotees. The government along with the Tourism department is planning to make this place a preferred pilgrimage destination to draw the attention of tourists

The temple comprises of two towers (Vimanam) made separately one each for Lord Shiva and Amman. The temple for Amman lies to the right side of the Lord Shiva’s temple. This is a classic example of Pandya dynasty architecture. If the towers were built on the Sanctum, then it can be taken as the temple was built by Chola dynasty.

The important features of this temple are that statues of two Nandis that sit in front of the Shiva temple. It is also said that there are five shiva lingas in the temple. Three of them can be seen on the outside, while one is in the sanctum and the fifth is said to be invisible. The temple opens to the south side instead of east, which is very unusual. The temple does not have any lamp post (Deepasthala Pillar) which is common in all the Shiva temples of this region.

On the northern side of the temple one can see several inscriptions that date back to 5th century.  According to M. Ganesan, an epigraphist, who is also the former emeritus professor of Indian Council of Historic Research at Bharatiar University who conducted study on this temple the inscription say Shiva linga was worshipped by tribal of that period.


The story behind two

According to the "thalapurana" it is said that the Nandi that was originally erected in the temple used to come alive at night and eat the crops near the temple. One night a farmer cut the ear of the bull so that he can recognize the bull that ate his crops in the morning. But to his surprise, he could not find a bull with cut ear in the village. But rather, the villagers found that the Nandhi in the temple had its ear cut and blood oozing out of the ear. Villagers repented the act and made a  new Nandhi and put it in place of the old one. But by next morning the old bull moved back to its place. And the villagers could not move it not matter how much force was applied. so they left the two Nandhis as it is.

Explore more about Tourism in Tiruppur