* In case of any delay in receiving the OTP, you may verify it later. Please proceed without verification.

Your mobile number is not registered with us. Please register your mobile no.

Tirpur is a small city in the state of Tamil Nadu. Tirpur is well known for its garment industry. Like any other city in the state of Tamil Nadu, Tirpur also has some religious significance. One such temple that is considered very auspicious in the city is the temple of Venkatachalapathy. Tirupur Thirupathi Sri Venkatesa Perumal Templeis is considered being the most powerful temple of all in the Tirpur city. The temple was built by Sri Venketraman and Subhadraa Family Trust. Even today, the temple and its administration are managed by the same family trust. 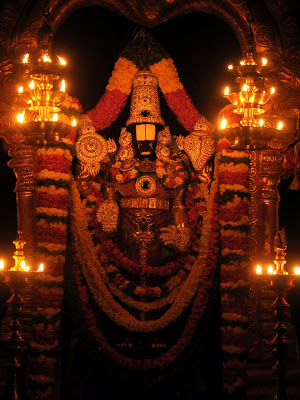 The temple was built as a replica of the Lord Venkateswara temple in Tirumala Tirupati Devasthanam. The ritual followed and poojas performed to the Lord venkateswara in this temple as similar to that followed in Tirupati. The Lord of the temple Venkatachalapathy is considered to be powerful and who protects his devotees from their difficulties and sorrows. The consort of Lord Venkatachalapathy in this temple is Goddess Shri Alamelu Mangai also called the Thayar in local language.the temple also has the idol of Shri Anjaneyar who is considered as loyal devotee of Lord in one of his other forms as Lord Rama.
Another idol that is present in the temple is that of Shri Garudalwar who is considered to be a close associate of Lord venkatachalapathy. The idol of Shri Hayagrivar is also present in the temple. Shri Hayagrivar is the guru of Goddess Saraswati who grants knowledge. As her guru, Shri Hayagrivar also grants knowledge and wisdom to the devotees.
Devotees who promised to make offering once their wishes are granted can fulfill their vows here in this temple if they are not able to go to Tirupati for any reason.

This temple in Tirpur is called Melai Tirupathi. The “Dwajasthambam”, Bali Peetam and the Kodi Maram can be seen at the entrance of the temple. Facing the main deity is the idol of “Garuda Azhwar” who is seen praying to the Lord folding his hands. Next lies the Maha Mandapam and the Ardah Mandapam. Once devotees enter this place, they hear the holy chanting, “Om Namo Narayana”. The temple comfortably stands in the interjection of four streets.

The main deity is seen in the form of Swayambu in the sanctum sanctorum of the temple. The Lord facing east side gives darshan to his devotees who come from far and nearby places. After the darshan, the devotees move to the inner “Prakaram” of the temple. The devotes pass through the sannidhi of “Venugopalaswamy” and the sannidhi of “Chakrathazhwar” while going around the temple in clockwise direction. Then the devotees can get the darshan of “Anjanaiyar”. Next the devotees take the darshan of Azhwars (the twelve mystic saints) before proceeding to pray “Thumbikai Azhwar” (Lord Ganesa). The The sannidhi of “Alamelumangai Thayar” and “Andal” bless the devotees with four hands and a smile on her face. As one is finishing the circle, they get to see the idol of Lord Venkatachalapathy along woth the carvings of Dashavatara across the “Lord’s Lotus feet” (Thiruvadi). Having taken the blessings of “Sanishwarar”, one can finally reach the “Kodimaram”. Every year on the auspicious day of Vaikunta Ekadashi, Lord “Vaikunta Narayanamurthi” along with his consort “Lakshmi Devi” gives blessings to the devotees.

Purattasi festival and the chariot festival are two important celebrations of the temple. The Purattasi festival is performed for six consecutive days during the Tamil month of Purattasi. This month falls in the months of September and October.  People from nearby places and also abroad come to take part in this festival. During these six days the rituals of the temple start at 4 in the morning with the abishekam of the Lord. In the afternoon Maha Deeparadhanai is performed. In the evening, the Lord along with his consorts take ride in the majestic Garuda vahanam in all the streets of the city. The vahanam is beautifully decorated with flowers. Devotees carry “Meravanai” to fulfill their vows.

Explore more about Tourism in Tiruppur